Find out how to choose the best CPU cooler for AMD's Zen+-based Ryzen 3 2300X processors.

This article will discuss choosing a CPU cooler for AMD's Ryzen 3 2300X processor.

The Ryzen 3 2300X CPU isn't available in a boxed version. However, you may be able to purchase it in a tray version or as part of a pre-built computer.

How to Choose the Best Cooler for the 2300X

The easiest way to find a CPU cooler that will work for your computer is to search by socket type. For example, the 2300X uses an AM4 socket, so you would search for an AM4 CPU cooler. 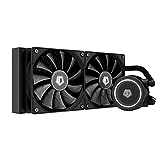