Find out how to choose the best CPU cooler for AMD's Zen-based Ryzen 3 2200G processors.

This article will discuss choosing a CPU cooler for AMD's Ryzen 3 2200G processor.

How to Choose the Best Cooler for the 2200G

The easiest way to find a CPU cooler that will work for your computer is to search by socket type. For example, the 2200G uses an AM4 socket, so you would search for an AM4 CPU cooler. 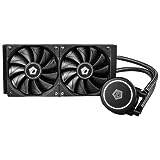 The boxed version of the Ryzen 3 2200G CPU comes with the Wraith Stealth CPU cooler. While stock coolers will prevent your CPU from overheating, your CPU will throttle its performance during games and other intensive tasks. Higher TDP coolers will keep your CPU at turbo speeds for longer durations. Stock coolers are often quite loud at their maximum speed.