Find out which Nvidia and AMD GPUs support PCI-Express 4.0.

Both Nvidia and AMD graphics cards supporting PCI-Express 4.0 are available.

The key benefit of upgrading to PCI-Express 4.0 is the increased bandwidth. Each version of PCIe roughly doubles the bandwidth available per lane

Any devices which were designed for PCIe 4.0 can benefit from the increase in available bandwidth.

However, some devices may not even be reaching the limits of PCIe 3.0 yet. The low bandwidth usage by some devices means that it's only necessary to upgrade if:

The component which can benefit the most from PCIe 4.0 is NVMe storage. The latest top-performing NVMe SDD and add-in card (AIC) storage devices can benefit from both the higher throughput and the throughput available per lane.

With each PCIe version doubling the bandwidth per lane, newer devices can reduce the number of needed lanes. For example, if even the top tier of graphics cards no longer need the full 16 lanes to meet their needs, they can use 8 or fewer lanes. By using fewer lanes, it frees up more lanes for other devices. Using fewer lanes is important because CPUs provide a limited number of lanes, which need to be distributed among the devices.

The same is valid for storage. If your storage devices no longer need as many lanes, PCIe add-in card (AIC) adapters can connect more NVMe M.2 SSDs.

For networking, a single lane could now provide enough bandwidth for 10 Gbps Ethernet.

If you are building a new system, it may make sense to do the upgrade to 4.0. In particular, future graphics cards and storage devices may further take advantage of this available bandwidth. In this case, you might consider how long you plan to use this computer. For example, will you upgrade your storage and graphics card over the next few years or wait to replace the entire system? 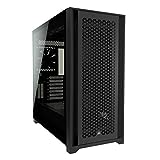 What Is the Latest Version of PCI-Express?

The latest available version of PCI-Express is PCIe 5.0. PCIe 5.0 CPUs are available from Intel and AMD.

PCIe versions such as 3.0, 4.0, and 5.0 are sometimes informally referred to as PCIe Gen 3, PCIe Gen 4, and PCIe Gen 5. This naming is based on them being the third, fourth, and fifth generations of PCI-Express.

PCIe 5.0 graphics cards and storage devices are not currently on the market.

Learn more in my PCI-Express

Which Desktop and Workstation PCIe 4.0 and 5.0 CPUs Are Available?